There were two big differences in the way the Pertemps Handicap Network Final and the Stayers Hurdle were run this year and with talk of the Pertemps winner, Sire Du Berlais, perhaps heading into the Stayers Hurdle at the Cheltenham Festival next season, it is worth comparing the two races to find out just how good the back to back handicap winner was. Here I use my recorded fractions on the clock in comparison to those that contested the Grade 1 contest and the Handicap run on the same day.

My Fractions for the leaders and the winners

My recorded fractions of the leaders in both the Pertemps and the Stayers Hurdle with both times recorded from the landing of the first hurdle. Both races set off fairly evenly but to get a clear starting point this has proved more accurate.

The first recorded time in each column shows the landing side over the second hurdle. 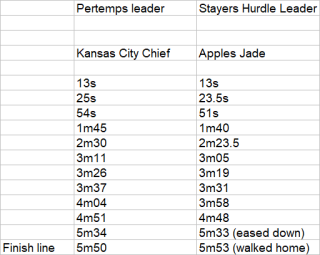 Apples Jade took the Grade 1 Stayers Hurdle field along at a scorching gallop which was evident as soon as touching down after the third hurdle clocking a time of 1.5 seconds ahead of the Handicap.

The margin only grew throughout the contest highlighted below with the Stayers Hurdle leader hitting a peek of 7 seconds ahead of the Handicap race leader Kansas City Chief.  The visual comparison of the races’ side by side is quite remarkable. 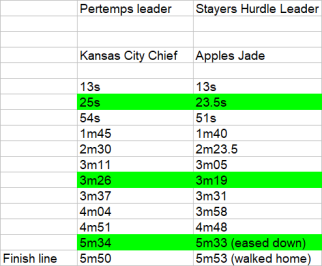 Apples Jade’s sensational effort unsurprisingly fizzled out on the run into the home straight as she was eased down when passed by multiple rivals before the final hurdle but remarkably she still managed to jump the final flight in 7th 1 full second ahead of Kansas City Chief who was still leading his field into the home straight before fading and jumping the final flight in 5th position.

Using the formula of 4 lengths per second, Apples Jade would have proven to be 28 lengths clear of Kansas City Chief at her peak fractions and even if Kansas City Chief was able to make up that remarkable distance she still would have been 4 lengths clear of the horse at the final flight before he took over on the run in as Apples Jade walked home.

Apples Jade clearly took many out of their comfort zone in the Stayers Hurdle and made the race a real test of stamina. 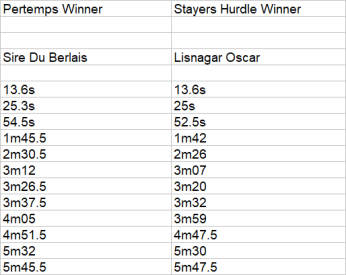 Grade 1 Stayers Hurdle winner Lisnagar Oscar’s performance seems to have slipped under the radar given his large price tag of 50/1 SP and his official rating of just 146. He raced in the fifth position throughout the race and did the best of those ridden prominently off a strong pace. The two finishers in behind, Ronald Pump and Bacardys were held up and should have been suited by the way the race developed if they were good enough to win. The fractions above show no sign that the pace relented at any point in comparison to the fast-finishing Pertemps Handicap Final and therefore Lisnagar Oscar should have been inconvenienced by the prominent riding position such as the fate of Summerville Boy (5th) and Ask Dillion (10th) as well as Donnas Diamond (PU) but his improvement came at the right time and there would be no surprise should the seven-year-old have more to offer in the future.

In comparison to the Pertemps race won by Sire Du Berlais – Lisnagar Oscar was rated 6lbs inferior to the winner but recorded much quicker fractions throughout the race and had they been racing side by side, Lisnagar Oscar would have proven to be 26l ahead of him at the 8th hurdle. The Stayers Hurdle winner also maintained the advantage to the second last hurdle and it was only the strong finishing kick from Sire Du Berlais from two out to the finish line that put him 8l clear (on the clock). That should, however, come as no real surprise considering the energy (in comparison to Lisnagar Oscars run) he would have conserved on the slower circuits.

While each race is run differently, based on the above evidence, Sire Du Berlais has plenty to find if Lisnagar Oscar was to reproduce this performance next season under the same conditions. There is absolutely no reason to believe that this run was a “fluke” by Lisnagar Oscar and as his fractions are so superior to Sire Du Berlais it would be difficult to recommend the Pertempts winner at this stage. Sire Du Berlais has shown improved form at Cheltenham on both occasions wearing first time headgear (Blinkers this day) and that could prove to be the key to his improvement. No doubt he deserves his place outside of handicap company but he was outpaced on occasions in the Pertemps race. It’s quite likely that he would have been taken off of his feet if running in this year’s Stayers’ Hurdle and it’s even more likely he would not have had the conserved energy to finish as strongly as he did in the Pertemps this year.

Both horses are trading at an ante-post price of 14/1 with SkyBet and I would much rather side with Lisnagar Oscar at this point in time.

The Storyteller – Raised 4lbs from 149 – 153 but effortlessly pulled clear of the remainder and it would be no surprise should he be back here for a second attempt next term.

Lisnagar Oscar – Improved plenty, was not a fluke performance could have more to offer and should be towards the head of the market next year.

Paisley Park – Market overreacted to a poor performance? lost two shoes in running and the ground was testing enough.

View all posts by Daryl Carter